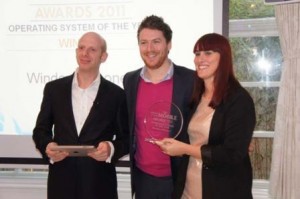 Another great year for microsoft. After getting lots of success with Xbox 360, now microsoft’s mobile OS  Windows Phone 7 has been acknowledged as the ‘Operating System Of The Year 2011’.

Here is a lists of comments from judges on Microsoft’s winning OS:

“It has the most potential, with a unique interface and a rapidly growing apps selection. It has a great looking UI and doesn’t look like Android or iOS.”

“A massive move from the previous OS. Huge growth in apps and the system looks heaps better than the competition.”

“A refreshing OS that doesn’t try and copy other operating systems. Has attracted a large number of developers too.”

In terms of marketing influence, Windows Phone is still rather a long way behind Apple’s iOS and Google’s Android.Hope in coming days we can expect a tough competition among Apple, Android and windows  mobile os.