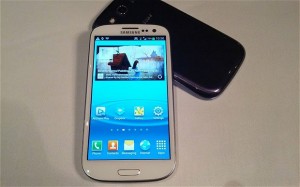 Samsung has unveiled most awaited Galaxy S3, its next-generation Android smartphone in London before few hours. The phone comes with some new and amazing features.

The Samsung Galaxy S3 has a super AMOLED 4.8 inch screen, which is larger than the S2, with an 8 megapixel rear camera and 1.9MP front camera which offers “unique camera features” that the company says will track the eye movement of the user.

Other featues included a Quad-core processor,1GB Ram 16/23GB storage with slot for microSD card, 8MP camera with burst mode, zero shutter lag and backlit sensor, 2,100mAh battery, wi-fi, 3G, Bluetooth.Samsung Galaxy S3 has the thickness of 8.6mm with a weight of 133 grams.
This makes Galaxy S3 heavier than Galaxy S2. Though it is also bigger in size.As expected S3 runs on Google’s Android 4.0 (Ice Cream Sandwich) software, but has a number of Samsung additions –like voice recognition.

Samsung said it will go on sale with 296 carriers in 145 different countries and will start selling on 30 May in the UK, with Orange and Phones4U.Samsung S3 comes in a 15GB or 32GB version, though the company said a 64GB model would come very soon.

Samsung is planning a 10 city world tour for Galaxy S3 and has included Delhi(India) in its list.It also comes with an app named S Voice, which is similar to apple’s SIRI.The app “S Voice” can even click a picture if you tell phone to take a photo.