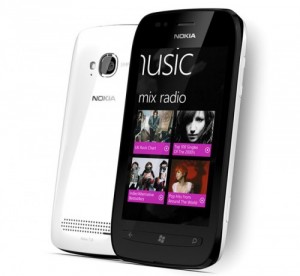 Nokia officially announced that they are all set to launch its first Windows phone 7 smartphone, Lumia 710 in India next week.India will be one of the first countries to receive this smartphone in its first shipment.Other countries where the Nokia Lumia 710 will be shipped include Singapore,Russia and Hong Kong.Nokia has started selling Lumia 710 in Taiwan from yesterday.

Nokia Lumia 710 comes with a 3.7 inch ClearBlack TFT LCD screen that offers an 800 x 480-pixel resolution.There is a 5 megapixel auto-focus camera with an LED flash which supports HD video recording.Like nokia Lumia 800, it also has a 1.4 GHz processor. It supports a 8GB internal storage memory which can also be expanded using a microSD card slot.

The Nokia Lumia 710 comes in stealthy back and crisp white color.Nokia 710 features a overall plasticky built and does not support a Carl Zeiss camera.

Although the pricing for the Lumia 710 is not yet finalized for India,the expected price for Nokia Lumia 710 is around  20,000 INR. If you are a great fan of Nokia and would like to taste a windows phone 7 then you must buy this phone.