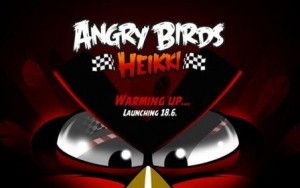 If you are a die hard Angry Birds fan, we have a great news for you. A new version of angry birds will be released on June 18. This new  Angry Birds game is known as Angry Birds Heikki and it seems that it has a lot to do with racing. Heikki Kovalainen is the name of a Finnish F1 driver and is sponsored by Angry Birds. Because of this deal he will wear an “Angry Birds” themed helmet for the 2012 season.

Rovio Entertainment, the creator of Angry Birds has set up a new mini-site for new Angry Birds game Heikki, teasing its launch with social sharing buttons that is set up to create buzz on  Facebook, Twitter and Google+.

Rovio’s latest game in the Angry Birds range has already crossed 50 million plus downloads on all platforms in just 35 days, driving total cumulative downloads for the entire franchise past the 1 billion mark.

Like Angry Birds space, we expect Rovio will add some new exciting features to this new Angry Birds Heikki.We hope people are really going to enjoy this new version of Angry Birds on this summer.