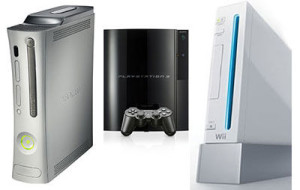 The Wii is the absolute best system to have set up if you are planning a party and want to include some gaming action. You do not want people sitting cross-legged on the floor drifting into the ‘gamer zone’ in silence playing super serious games, instead you want people up on their feet, making fools of themselves being really bad at Wii bowling. Let’s take a look at the top five group games for the Wii.

What better way to play nicely with your friends than by trying to knock their heads off? The classic Punch Out was made to be played on the Wii, where you can literally stand and throw punches like there’s no tomorrow. Just make sure you keep your cool and do not get yourself disqualified. Get a tournament on the go and find out which of your friends is the Baddest Man In The World.

The coolest thing about this game is that you can have eight players in the game at once. Get everyone involved as you frantically try to avoid getting blown up, while laying traps for your friends to fall into. A simply but utterly addictive game that needs little explanation. Anyone can play Bomberman and that’s just what you want for a party situation. Playing with eight players is great fun, but you might find that some of the older Wii consoles have trouble with the sensors picking everything up. It is no problem if you have a newer one and if not you would have no trouble Selling your Nintendo Wii online and picking up a newer one somewhere. It’s totally worth it for Bomberman.

The brilliant Mario Kart series gets the Wii treatment here with a lightning fast, all-action race game that anyone can pick up and play. All your favourite characters are back but with more weapons, tracks and new game mode features than ever. Pretty much every version of Mario Kart ever released has been great fun and this is no exception.

OK, so I gave this one away a bit in the first paragraph, but this has to be included in any top five list. This is part of the Wii Sports game package and it provides endless fun. The other sports options are golf, tennis, baseball and boxing – all of which are fun – but bowling is in a league of its own. Perfect for group play, it can be a free for all or a team affair as you strive to become The King Of The Lanes.

This is the mighty return of a classic game. Goldeneye on the N64 console is one of the best multi-player games ever and this upgrade is a worthy successor. Featuring improved versions of all the old battle grounds and with a number of new missions and features, this game sorts out the men from the boys. The four player battle of survival is the crown jewel, where you each hunt the other in a race against the clock to stay alive. A real edge of your seat game of cunning and guile.