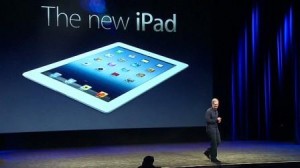 As expected Apple launched its next version of ipad couple of hours ago with lots new features and specifications.The new  version of iPad is named is “The New iPad”. Along with new iPad, Apple also released Apple TV 2012 and iOS 5.1 Download for iPad, iPod Touch and iPhone.The new iPad will be available in US, UK, Singapore, Hong Kong and 6 other countries starting March 16th.

All About The New iPad

The display of the new iPad remains same as the old one, but its resolution increased to 2048 x 1536 with Retina Display and this is the highest resolution display ever seen on any mobile device.

It was really unexpected to get a 5 mega pixel camera in the new iPad. This time Apple include features like auto focus and auto exposure.You can take some incredible photos with the new ipad.

The new iPad comes with a brand new A5X quad-core graphics chip and it offers almost four times better graphics than the dual-core A5 chip in the iPad 2.

The all new iPad comes in 6 variants like iPad 2, starting with price tag $499 for the 16Gb model WiFi model.The highest priced 64GB model with WiFi and 4G will be available for $829.