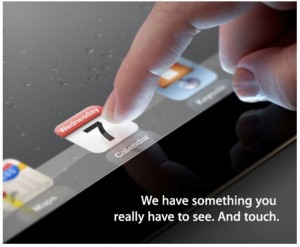 Apple Inc. will hold a product event on March 7, 2012 in San Francisco, where Apple may unveil its most expected gadget the iPad3. “We have something you really have to see. And touch,”-This is the tag line Apple used in their invitation cards.

Although we can’t guess the price and features of next iPad, already there are lots of rumours about it. According to those rumours the Apple iPad 3 may have a Retina display (2048 x 1536 pixels), a quad core processor, iPhone 4S style camera, Siri, LTE network  and many more.Apart from this Apple can can some unique features in iPad 3.

The upcoming event will be the first major Apple product launch since the death of its co-founder Steve Jobs in last October. Along with iPad 3, Apple may unveil an updated Apple TV set-top box, which could stream higher- resolution video to consumers’ televisions.

Market researchers expected, this time Apple may set a lower price for its new iPad 3 because of high competition in tablet market. While Apple’s tablet starts at $499, its rival Amazon’s Kindle Fire costs only $199.

We have to wait another one week to know what Apple wiil launch on that particular day. Till then stay tuned TechNied and keep updated yourself with latest technology news.