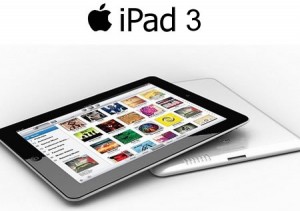 Apple’s ipad3 is almost ready and will lunch on wednesday, March 7. There is a rumour that the new Apple iPad 3 will have a ‘retina display’ – that is, an improved screen resolution 2048 x 1536 pixels. It also come with a quad-core processor.

iPad3 will be the first product from apple side to support the faster LTE data networks(faster than 3G) now available in the U.S. from carriers like Verizon and AT&T.

Other Expecting Features of Apple iPad 3–