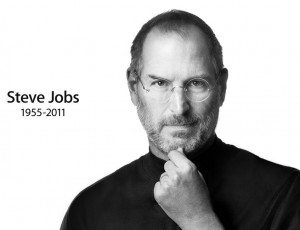 On 5th October, Wednesday night, apple.com opened with Steve Jobs’ black-and-white picture, along with his name and years of birth and death.He died at the age of 56.

Here is Apple’s tribute to him:

“Apple has lost a visionary and creative genius, and the world has lost an amazing human being. Those of us who have been fortunate enough to know and work with Steve have lost a dear friend and an inspiring mentor. Steve leaves behind a company that only he could have built, and his spirit will forever be the foundation of Apple.”

1. Steve Jobs was born on February 24, 1955 in San Francisco, California. He was put up for adoption and was shortly adopted by a couple named Clara and Paul Jobs.

2. Only few people know that Steve Jobs is a college dropout.Jobs graduated from Homestead High School in Cupertino, California and enrolled in Reed College in Oregon.But one semester later he dropped out.

3. Jobs started Apple in April 1976, with another college dropout Steve Wozniak in his family garage in Los Altos.

4. In his early life, Jobs studied Zen Buddhism. He used to say that he wanted to become a monk in a monastery in Japan instead of starting Apple.

5. Only few know that Steve Jobs is a Buddhist and a vegetarian.

7. Few know that Steve Jobs is a Buddhist and a vegetarian.

8. Jobs takes home $1 as salary. His compensation came to spotlight when the company gifted him a Gulf stream airplane in 2001.Jobs often joked about his meager salary, saying: “I get 50 cents a year for showing up, and the other 50 cents is based on my performance.”

If you know any interesting fact about Steve Jobs, Please add it to our comment section. Thanks for reading.