Seawater desalination is the filtration process where the salt from the seawater is removed so that it can become tap water. The seawater is first pumped into a huge multimedia filter tank that is made from several layers of anthracite. The lowest level of the tank is covered with gravel and another layer of sand on top. They will use some screens to filter way the debris from the sea.

The desalination process where the seawater passes through numerous layers of membranes that can effectively filter off the salt. This process which is also known as reverse osmosis will remove over 99% of the salt and minerals. The most common types of membranes used in the seawater desalination process are spiral wound and hollow fiber. These membranes are usually made from polymeric materials. By removing the salt, the water is now more fit for drinking.

The water is forced through semi permeable membranes under a high pressure to eliminate the salt that has been dissolved in the water. The amount of pressure used in exerting the seawater through the membrane is at least 600 psi. The membranes has very tiny strainer that make sure that only the pure water pass through so that other impurities such as salt and microorganisms are left behind. The place where the reverse osmosis process takes place houses tens of thousands of semi permeable membranes. 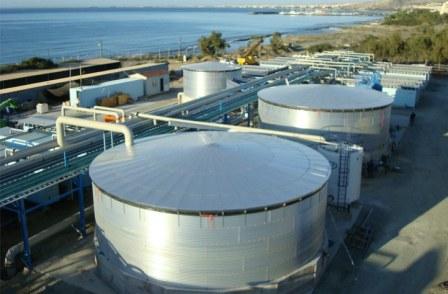 Besides seawater desalination, the reverse osmosis process is also used in the water treatment of various industries. Reverse osmosis is used in the elimination of minerals in the boiler water in the power plant industry. The water has to be distilled a number of times to ensure that there is no deposit left on the machinery so that it can work efficiently. Deposits on the machinery can result in poor turbine power production. Reverse osmosis is also used in treating effluents as well as ground water that are released from different industries. It can be used for treating scaling wastewater and producing water that is deionized. Reverse osmosis relies on the use of pumps that can exert high pressure. Reverse osmosis filtration process has been practiced in certain countries in the world to treat wastewater prior to sending them back as clean water into the reservoir.

The remaining water after the desalination process is called brine and it is usually mixed with wastewater so that it can be less salty. The water must pass through a post treatment before it is transferred into a municipal water system. Chlorine is added into the water to destroy the germs. They also usually add minerals such as fluoride to meet the minimum requirements of the health department in the region. The addition of minerals into the water can help to improve the water taste.