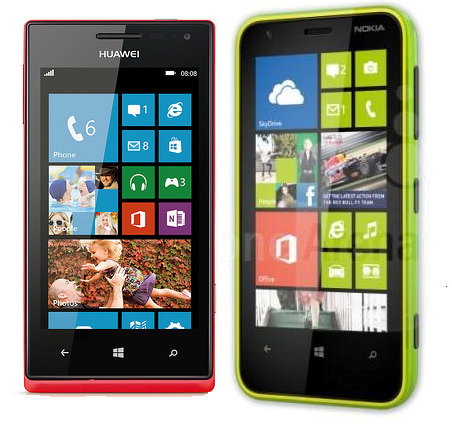 Windows Phone 8 has forayed into the market. It has received positive response from critics and fans alike, with most of them acknowledging that Phone 8 is a drastic improvement from 7.5. Well, it supports external SD card slots, you need to download an app from the marketplace, and better apps are available.

Leading companies have launched their own flagship Windows Phone 8 devices in previous months. But for those who have a tight budget and want to buy a Windows Phone 8, they can choose between Nokia Lumia 620 vs Huawei Ascend W1. These two are budget-oriented Windows Phone 8 smartphones, with mildly impressive specs.

Nokia is known for its Lumia range of devices. It gave up on MeeGo, to make only Windows Phone-powered devices. Lumia series has met with both critical and commercial success. (In one quarter alone, Nokia shipped about 4.4 million Lumia’s.)

Ascend W1 is Huawei’s first Windows Phone 8 device and is said to be the cheapest one ever. But will that help it beat the Nokia Lumia 620?

2. Memory In Windows Phone 7.5, memory was not expandable. This was one feature which was disliked by many users. However in Windows Phone 8, you have a micro-SD slot. This is one case where Lumia 620 defeats W1. Lumia offers 8 GB of internal storage along with external memory, expandable to 64 GB. W1 offers only 4 GB of internal memory, along with which, only a 32 GB memory card can be used.

3. CPU W1 has a 1.2 GHz Qualcomm MSM8320 Snapdragon processor, where Lumia 620 has a 1 GHz Qualcomm S4 processor. Both use dual-core processors. S4 has been used in the extremely popular 800. The GPU of both the phone is same, that is, Adreno 305. That is quite an impressive GPU by all standards.

4. Battery This is perhaps the only area where W1 defeats Lumia 620 by a wide margin. W1 has a Li-Ion 1950 mAh battery whereas Lumia 620 has only a paltry 1350 Li-Ion mAh battery. That may be a setback for many potential buyers. The battery life may swing votes in favor of Huawei W1.

5. Pre-installed apps Well Nokia by now has become quite experienced in marketing Windows Phone. They know that most of the buyers won’t buy their range of phones only because of Windows. They need top third party apps to draw customers from rivals. Some apps that Nokia have made until now are:-

Plus, many more apps that can be installed later. City Lens is one of the most innovative apps that some people may have ever used. Nokia knows how to sell a product. Sadly, W1 doesn’t come with any Huawei-engineered apps. Nokia wins in this criterion.

Conclusion
Nokia has been making Windows Phone, or should I say successful Windows Phone. Its range of Lumia phones has been critically as well as commercially successful.
W1 beats Lumia 620 mainly in battery, processor and screen size. However, customer satisfaction and service has been the forte of Nokia. Nokia has service centers in form of Nokia Care all over the country. Huawei is relatively a new player in Windows Phone market.

W1 may be the cheapest Windows Phone 8 device out there, but if battery life doesn’t matter you, then you are recommended to go for Nokia Lumia 620. It’s a little beast that outperforms W1 in most aspects.