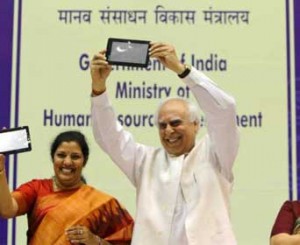 An upgraded version of world’s cheapest tablet Akash is set to be launch very soon, HRD Minister Kapil Sibal said yesterday. The new version of Akash will be equipped with a faster processor than its previous version.

“That was the dream and I as minister for Human Resource Development, asked myself the question can I provide a tablet to the students throughout the country that costs a reasonable amount so that all children can afford it and yet is able to deliver through the best technology, the vast information available on the net to them sitting wherever they are,” he said.

The upgraded version of the tablet is expected to arrive by early September.The Aakash 2 will run on Android 4.0 ICS. Other features include an 800MHz processor, 256MB of RAM, 2GB of built-in storage, 7-inch capacitive touchscreen, Wi-Fi and GPRS connectivity with voice-calling capabilities and many more.

The first version of Akash tablet was made by Datawind, but later the Indian government handed over the whole project to IIT-B. The latest announcement about the Aakash 2 comes five months after IIT-Bombay took over the project from Datawind.