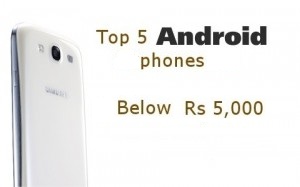 In today’s date, Android Phones have become a very in thing. A good deal of people out there are craving to get hold of an Android Phone. However, this particular desire of people happened to remain as a far off dream all because of the prices of these devices which were marked on the higher side. The good news here is that the passage of time has led to fall in prices of such devices with now these Android phones being made available at prices way too lower than a mere Rupees 5000. Let us now get to know the top 5 android phones that are available in the above price bracket.

About Author: Tarun Jaitely is a passionate blogger. He writes about Android Tips, Technology News and various Android Tips and Tricks on his Android blog.