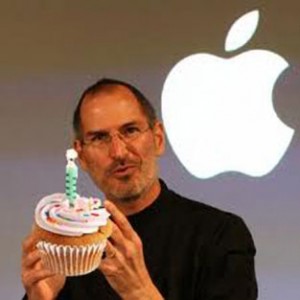 Millions of people around the world send Birthday messages through Twitter for Steve Jobs yesterday, on his 57th Birthday. Steve Jobs birthday was among the top five trends at Twitter. He is the man behind innovation of iPod, iPad and iPhone.

Some of the great Birthday wishes for Steve–

“Innovation won’t be the same without you,” read a Jobs birthday message at the official Twitter account of General Electric.

Jean-Luc Palumbo tweeted that he hoped Jobs was enjoying “iHeaven.”

Another tweet by a tech Moghul “Steve Jobs, thanks for making Apple not just a fruit,”

Here is another Tweet “Steve Jobs, You will never be forgotten, you changed the way we live.”

The late co-founder and CEO of apple died in last October after battling pancreatic cancer.There were rumours that iPad 3 would be released on 24th February to mark  his birthday, but there seems to be no clue on that.