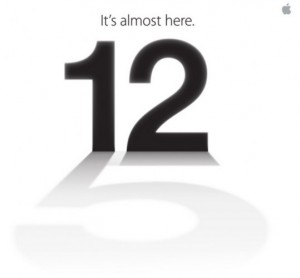 Apple started distributing invitations for an event to be held in San Francisco on September 12. The email invitation shows a big “12,” for September 12, casting a shadow in the shape of a “5” and it indicates that Apple can reveal their much awaited iPhone 5 on that day.

There are rumours that iPhone 5 will be a little taller, a little thinner, and a little stronger than Apple’s current iPhone. It is also confirmed that iPhone 5 will have a new 9-pin dock connector and may use the new nano-SIM card.There’s also a possibility the phone could have NFC technology baked in, along with redesigned earbuds.

Other unconfirmed reports say Apple will reveal a smaller version of the iPad, taking on competitors like Amazon.com Inc.’s Kindle Fire, which have nibbled on the edges of the iPad’s dominance in the tablet category.

The event will take place at San Francisco’s Yerba Buena Center for the Arts, the preferred venue for the unveiling of past products such as the iPad. iPhone 5 will be available for pre-order straight after the event

On Wednesday, Nokia and Motorola are holding events of their own in New York, apparently to reveal their latest products. So, the next Wednesday should be a pretty fun day on tech industry calender.