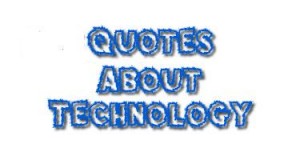 1.”I am enough of an artist to draw freely upon my imagination. Imagination is more important than knowledge. Knowledge is limited. Imagination encircles the world.”
—Albert Einstein

3. The production of too many useful things results in too many useless people.
—Karl Marx

5. Man is the lowest-cost, 150-pound, nonlinear, all-purpose computer system which can be mass-produced by unskilled labor.
—NASA in 1965

6. It is a medium of entertainment which permits millions of people to listen to the same joke at the same time, and yet remain lonesome.
—T.S. Eliot, about radio

7. Man is a slow, sloppy and brilliant thinker; the machine is fast, accurate and stupid.
—William M. Kelly

8. Technology presumes there’s just one right way to do things and there never is.
—Robert M. Pirsig

12. “For years there has been a theory that millions of monkeys typing at random on millions of typewriters would reproduce the entire works of Shakespeare. The Internet has proven this theory to be untrue.”
—Robert Wilensy

13. “If the automobile had followed the same development cycle as the computer, a Rolls Royce would today cost $100, get a million miles per gallon, and explode once a year, killing everyone inside.”
—Robert X. Cringely